The only comedy night you can bring your Naan to...

Curry on Comedy is the only comedy night you can bring your Naan to… Don’t miss this one-off evening, presented by Kash Patel Productions in association with Middlesbrough Mela, featuring Shazia Mirza, Tommy Sandhu, Kane Brown and Tez Ilyas. 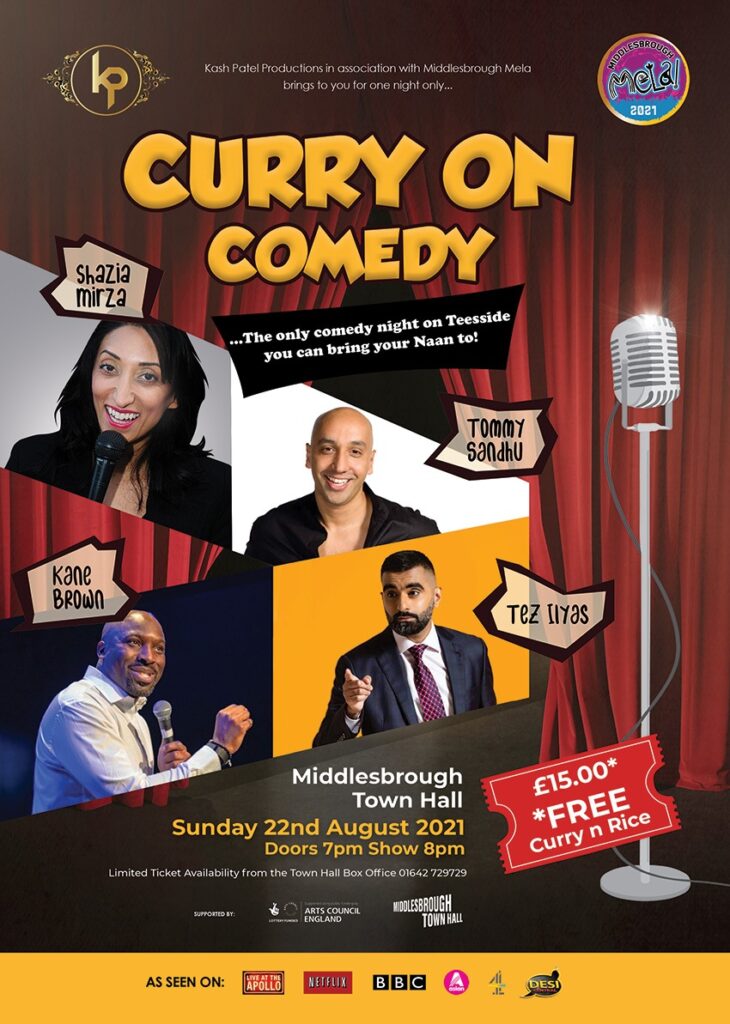 Meet your comedy stars for the evening!

Shazia Mirza is an award winning British stand-up comedian and writer who works internationally. She has performed stand-up shows across the world in Europe, US, Asia and the Far East. Listed by The Observer as one of the 50 funniest acts in British comedy, Shazia is also a winner of the prestigious PPA Awards: ‘Columnist of the Year’ for her writing in The New Statesman. Other publications she writes for include: The Guardian, Financial Times, Daily Mail, New Internationalist, Chicago Tribune, Big Issue and Loaded magazine.

Her parents just want her to get married…

Hailing from the East End of London, Tommy is a born and bred Londoner! At school, Tommy was known for talking A LOT and was always in the school theatre productions as well as local drama plays which allowed him to tour across Europe and even perform in London theatres while he was only a teenager.

Tommy went on to graduate from Bournemouth University in Advertising Management and then became President of the Students Union. During this time, Tommy appeared on Blind Date with Cilla Black. Soon after he became the ‘voice of Blind Date’ replacing ‘Our Graham’.

With a passion for music, Tommy’s DJ residencies have seen him play all across the country including top London venues such as China White, Movida, Cafe De Paris, Embassy, The Shadow Lounge and many more. He has also DJ’d at celebrity parties where his dance floor guests have included David and Victoria Beckham, Elton John, Joan Collins, Noel Gallagher and Jude Law.

The love of playing music grew into a desire to produce it. Tommy set up his own company producing theme music to TV shows. He remixed the theme for Blind Date and other shows on ITV1 which then got him the recognition to produce music for several shows on BBC1, Living, Bravo and Challenge amongst others.

As an established voiceover artist Tommy has brought his warm and youthful sound to adverts and commercials across radio and TV as well as prestigious events such as The MOBO Awards.

Tommy’s TV presenting has seen him host travel and lifestyle shows where he tests everything from gadgets and gizmos to yachts and hotels all around the world. You can currently catch Tommy on All Around the World with his techy reviews and look out for him as the ‘Gadget Guru’ on Fast:Track on BBC World.

Kane Brown is a name that has become associated with fearless and bold comedy. Honest and energetic, this fast-paced comic owns any stage and will leave you breathless with laughter and the ladies a little weak at the knees.

Kane has performed at many of the world-renowned comedy venues (Comedy Store, Comedy Café, Glee Club, Hackney Empire, Shepherds Bush Empire, Indigo O2, to name a few). He has also interviewed stars from the red carpet for film previews and premieres.

Kane always adds a comedy element to anything he does, as this is his natural way of interacting, making him a versatile charming all-rounder.

Tez Ilyas is one of the most celebrated stars in British comedy.

In 2015 Ilyas achieved phenomenal success with his debut stand up hour TEZ Talks. A sell out run at the Soho Theatre and his own Radio 4 series based on the show followed, with a second series quickly being recommissioned. In 2016 his highly anticipated follow up show Made in Britain went on to sell out every single performance (including extra shows) at the Edinburgh Fringe and gained spectacular critical acclaim, with a smash hit nationwide tour in 2017. His third show Teztify once again delivered a spectacularly powerful, provocative and brilliantly funny hour of topical stand up, delivering to packed out audiences night after night.

Tez’s Channel 4 comedy Blap Bounty is the most watched show in the strand’s 10 year history. In 2019 he fronted his own Channel 4 satirical sketch series The Tez O’Clock Show to huge critical acclaim.

In 2020, Tez released his first stand up comedy special, Teztify, recorded live at the Southbank Centre, playing out exclusively on YouTube.

In 2021, Tez Ilyas will embark on his brand new nationwide tour show Populist.

Curry on Comedy is at Middlesbrough Town Hall on Sunday 22 August 2021. Doors open at 7pm, show begins at 8pm.